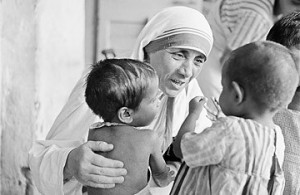 The verses below reportedly were written on the wall of Mother Teresa’s home for children in Calcutta, India, and are widely attributed to her.

Some sources say that the words below were written on the wall in Mother Teresa’s own room.  In any case, their association with Mother Teresa and the Missionaries of Charity has made them popular worldwide, expressing as they do, the spirit in which they lived their lives.

They seem to be based on a composition originally by Kent Keith, but much of the second half has been re-written in a more spiritual way.  Both versions are shown

The version found written on the wall in Mother Teresa’s home for children in Calcutta:

People are often unreasonable, irrational, and self-centered.  Forgive them anyway.

If you are kind, people may accuse you of selfish, ulterior motives.  Be kind anyway.

If you are successful, you will win some unfaithful friends and some genuine enemies.  Succeed anyway.

What you spend years creating, others could destroy overnight.  Create anyway.

If you find serenity and happiness, some may be jealous.  Be happy anyway.

The good you do today, will often be forgotten.  Do good anyway.

Give the best you have, and it will never be enough.  Give your best anyway.

These are great, encouraging words and thought s to live by. My hope is that they touch your heart like they did mine!