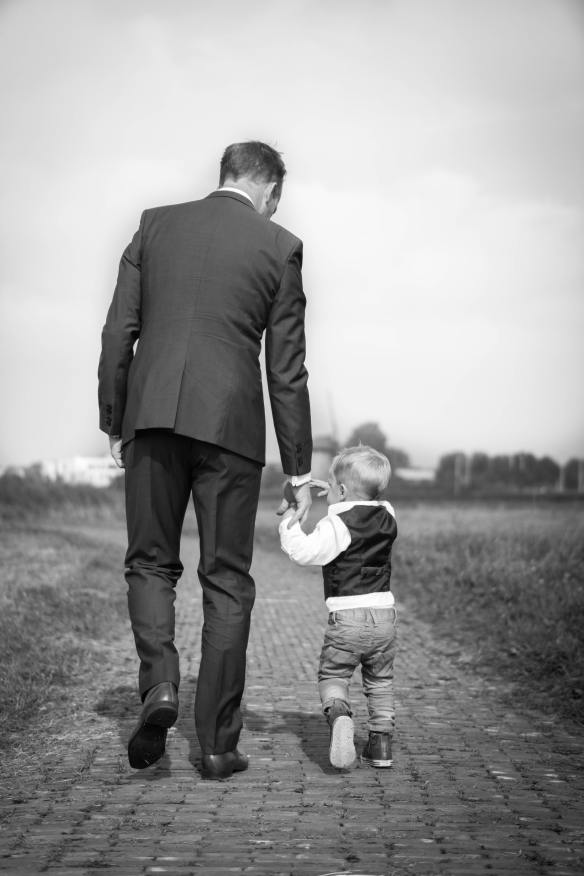 I remember when I was a little boy, watching and following my dad everywhere and wondering to myself what it would be like to be a “grown-up” and whether or not I would ever be as good as him. My father was a photographer who had his own little studio where he would take family portraits or pictures of people and their pets. He was also the photographer for a little town newspaper which had subscribers all along the New Jersey coast.

Wherever we went, everyone just seemed to know him, and they loved him. He always brought a smile, a laugh, and good cheer to others. I remember thinking how awesome that would be if someday, when I got older, when I became a “grown-up,” I could do the same and have people think the same way about me.

Of course, there were other people in my life that I always thought would be nice if I had some of their attributes as well. They all influenced my life to make me the kind of person that I am today.

What does your children or other people think of you?

Today’s poem is a beautiful writing that shares with us the questioning mind of a little child and how they, so much, want to be like their adult companion. Good “food for thought!”

When I Grow Up

When I grow up

I want to be big and strong

I want to play sports,

I want to dribble

Spike, run, throw, bat, dive and roll…just like you.

and you always will be…

I wish I was grown up now.

Do you think that I will be tall?

Do you think that I’ll be good like you –

Will there be enough left for me

When I get grown-up?

Will you help me – will you show me the way?

I want you to

When I grow-up I want to be just like you.

Unfortunately, there are also other kinds of relationships that can be abusive, hateful, and unbearable. In many instances, people feel trapped…wanting to get out of them but either unwilling to “take the step” or afraid…of either not knowing what to do next or of more physical and/or emotional abuse.

A few days ago, I came across the following story on kindnessblog.com that I decided that I would share on my blog, that will hopefully motivate and encourage someone who might be experiencing an unhealthy relationship right now. It is a beautiful story of courage and hope.

A man came across a folded piece of paper while he was at San Francisco airport that said ‘read me‘ on the front.  How could anyone possibly resist that invitation?  He knew he just had to look.  So, he did.

And what he discovered inside was surprising and wonderful…

“I recently left an emotionally abusive relationship After months of insults I wont repeat, false accusations, lies, delusions, broken mirrors, nightly battles…. I left. I know that I was being poisoned by each day that I stayed. So with a heavy heart, I left my lover of three years, knowing that I had already put it off too long. At first he begged, then he cursed, but eventually he packed his bags and faded out of my life like a bad dream.

For the first few weeks, my body seemed to reject this. For three years I had seen the world through him-colored glasses. I didn’t know who I was without him. Despite the kindness of friends and even strangers. I could not help feeling utterly alone.

But it was this sense of lonesomeness that set me free. Somewhere along the way, I let go. I released all the painful memories, the names he had called me, the shards of him buried deep in my brain. I stopped believing the things he had made me think about myself. I began to see how extraordinary, breathtakingly beautiful life is. I meditated, drank too much coffee, talked to strangers, laughed at nothing. I wrote poetry and stopped to smell and photograph every flower. Once I discovered that my happiness depends only on myself, nothing could hurt me anymore.

I have found and continue to find peace. Each day I am closer to it than I was yesterday. I am a work in progress but I am full to the brim with gratitude and joy. And so, since I have opened a new chapter in my life, I want to peacefully part with the contents of the last chapter. The end of my relationship was the catalyst for a wealth of positive changes in my life. It was a symbol, more importantly, it was an act of self-love. It was a realization that I deserved to be happy and I could choose to be.

And so, in an effort to leave behind the things that do not help me grow, I am letting go of a relic from the painful past. I wore this necklace-a gift from him-every day for over tow years. To me, letting it go is a joyous declaration that I am moving forward with strength and grace and deep, lasting peace.

Please accept this gift as a reminder that we all deserve happiness. Whoever you are, and whatever pain you have faced, I hope you find peace.

Leaving a toxic relationship isn’t easy, but it is most certainly possible.

Jamie’s letter shows that with courage and a measure of self-love, you can change your own life for the better, and find happiness in a way you might not have thought possible.

Have you ever REALLY wondered why the Chicken crossed the road?  Well the following answers are from famous people around the world. You will be enjoy reading there answers. Read them to find out what they are!

COLIN POWELL
Now at the left of the screen, you clearly see the satellite image of the chicken crossing the road.

HANS BLIX
We have reason to believe there is a chicken, but we have not yet been allowed access to the other side of the road.

MOHAMMED ALDOURI (Iraq’s former ambassador)
The chicken did not cross the road. This is a complete fabrication. We don’t even have a chicken.

SADDAM HUSSEIN
This was an unprovoked act of rebellion and we were quite justified in dropping 50 tons of nerve gas on it.

PAT BUCHANAN
To steal a job from a decent, hard-working American.

I don’t know why the chicken crossed the road, but I’ll bet it was getting a government grant to cross the road, and I’ll bet someone out there is already forming a support group to help chickens with crossing-the-road syndrome. Can you believe this? How much more of this can real Americans take? Chickens crossing the road paid for by their tax dollars, and when I say tax dollars, I’m talking about your money, money the government took from you to build roads for chickens to cross.
MARTHA STEWART
No one called to warn me which way that chicken was going. I had a standing order at the farmer’s market to sell my eggs when the price dropped to a certain level. No little bird gave me any insider information.

ERNEST HEMINGWAY
To die. In the rain. Alone.

MARTIN LUTHER KING, JR.
I envision a world where all chickens will be free to cross roads without having their motives called into question.

BARBARA WALTERS
Isn’t that interesting? In a few moments we will be listening to the chicken tell, for the first time, the heart-warming story of how it experienced a serious case of molting and went on to accomplish its life-long dream of crossing the road.

JOHN LENNON
Imagine all the chickens crossing roads in peace.

ARISTOTLE
It is the nature of chickens to cross the road.

KARL MARX
It was an historical inevitability.

VOLTAIRE
I may not agree with what the chicken did, but I will defend to the death its right to do it.

CAPTAIN KIRK
To boldly go where no chicken has gone before.

FOX MULDER
You saw it cross the road with your own eyes! How many more chickens have to cross before you believe it?

SIGMUND FREUD
The fact that you are at all concerned that the chicken crossed the road reveals your underlying sexual insecurity.

BILL GATES
I have just released eChicken 2003, which will not only cross roads, but also will lay eggs, file your important documents, and balance your checkbook – and Internet Explorer is an inextricable part of eChicken.

ALBERT EINSTEIN
Did the chicken really cross the road or did the road move beneath the chicken?

BILL CLINTON
I did not cross the road with THAT chicken. What do you mean by chicken? Could you define chicken, please?

COLONEL SANDERS
I missed one?