via The Crab and the Ocean 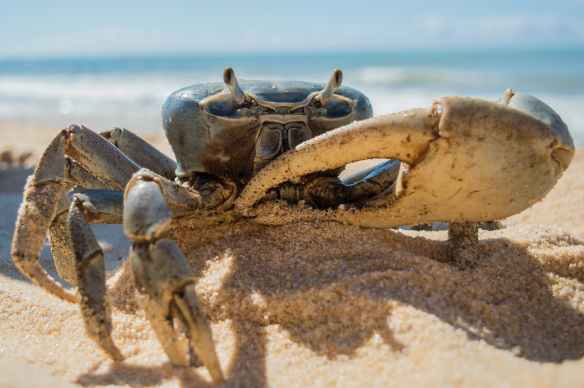 What in the world is happening? Why did something like this happen to me? Why is it that this individual continues to do this annoying thing to me? Don’t they understand that when they continue to do this same thing over and over, it really, really bothers me!?! What is this jerk doing? Why is this person so mean? Why is it, that it always seems like bad things always happen to me?

Occasionally, there are things or situations in life that happen that we simply don’t understand at the time we are experiencing them. Sometimes people will continuously do things to us, like our bosses, parents, or a host of other kinds of people, that we don’t comprehend why they are doing what they are doing. The result? We jump to negative conclusions, make poor judgments and assessments of others…many times resulting in embarrassing or awkward moments.

The following little story is a great little illustration which demonstrates a simple truth of life…that we should attempt to truly understand the unfortunate things that may happen to us before we judge others wrongly.

Once upon a time, there was a crab. It was walking on the shore of the ocean, leaving its beautiful footprint behind. The crab adored its footprints. Suddenly as the crab was adoring it footprints, the waves of the ocean washed the footprints away. The crab turned towards the ocean wave and said, “Hey!! I thought you were my best friend. Why did you do that?? Why did you wash my footprints away?” The ocean said, “A fisherman was chasing you, my dear friend, looking at your footprints, so I washed them away so that fisherman could not chase you.” It’s a general human tendency. We all judge each other in different situations and conclude about the person. Even in our relationships, we judge the people by the actions or behavior. But it is important not to conclude about that person and react without understanding other person’s intentions. (Divya Nimbalkar). http://frtonyshomilies.com/

JUDGING A PERSON DOES NOT DEFINE WHO THEY ARE…IT DEFINES WHO YOU ARE!

Photo by Pixabay on Pexels.com

Death, grief, despair: these scorns of life are devastating. Death is arguably the most sorrowful time an individual can experience in life. Most unfortunate is when people encounter death within a family, a friendship, or an acquaintance. Sometimes, the loss can hurt so bad that it may seem like the pain and suffering will never go away.

Bill, a dear friend of mine, lost his wife to cancer at age 60 and a brother to murder at age 42. He uses faith, philosophy, family, and friends to mitigate his loss.

I would like to share the following story/essay that he wrote a while ago while thinking of these unfortunate events. It is our hope that this story will help ease the pain and sadness of others who may be struggling with the loss of a loved one.

As part of the human race, we all suffer loss. Loss is not a one-time occurrence, it happens to us and then it happens again. Loss is always difficult to accept. On the loss of a loved one, we wish to hold open the door into the next world and pull the deceased out. We wish to kiss those vanished lips, to hear that silenced voice; but it doesn’t work that way.

There is an instructive story on grief titled, “Kafka and the Doll.” In the story, Franz Kafka encountered a little girl in the park where he and his friend Dora walked daily. The little girl was disconsolate and weeping as if her heart would break. When Kafka inquired about her tears, the girl said she had lost her doll. Kafka told the girl that he knew for a fact the doll was fine. How he could be so certain, the little girl asked? Why just that morning, Kafka told the girl, he had received a letter from the doll.

Kafka arranged to meet the little girl the next day at the same spot in the park. That night he composed a letter from the doll and read it to the little girl when they met. “Please do not mourn me, I have gone on a trip to see the world. I will write to you about my adventures.”

The meetings and the letters from the beloved doll continued. The little girl was comforted. When the meetings came to an end, Kafka presented her with a new doll. The doll obviously looked different from the original doll. An attached letter explained: “Do not be surprised at my appearance, my travels and adventures have changed me.”

Many years later, the now-grown girl found a letter stuffed into a deep fold in the cherished replacement doll. Kafka had written, “Everything you love, you will eventually lose, but in the end, love will return in a different form.”

Grief and loss are ubiquitous and an inescapable part of being human. Holding the perspective of the universality of loss, helps us deal with our loneliness and regret in times of grief, for if grief is omnipresent, we are less alone, less regretful. Holding the conviction that “love will return” is the path towards healing. As with the little girl in the story, following our loss and a period of grief, our job is to recognize love when it returns in its new form.

Those loved ones for whom we mourn would not want us to be in tears and sadness. They want us to remember them with laughter and with smiles, and to find love in all its new forms.

*Editor’s Note: Bill is simply a wonderful, charming, and outgoing man. After the loss of his wife, he continued teaching until he retired a few years ago.  Since then, he has traveled across America, hiked great mountains of the world, explored various countries and cultures, and has see and discovered the many beautiful things in this world. His warm personality and sense of humor have brought encouragement and happiness to all that have met him.

“The song may have ended but the melody lingers on.” ~ Irving Berlin 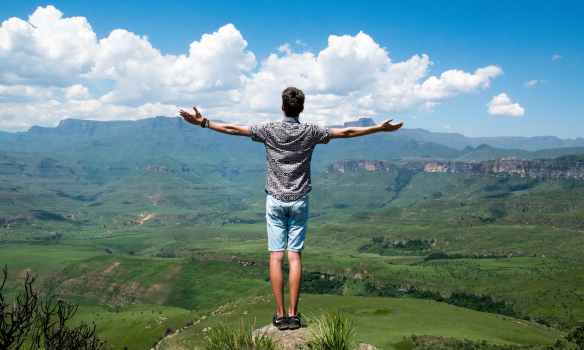 Photo by Julian Jagtenberg on Pexels.com

Life. It can be downright hard but it can simply beautiful. Life can be depressing and difficult or it can be fun and enlightening. It really all depends on how a person perceives it. It was once said that the difference between an individual who is successful and a person who won’t achieve the goals and desires of their life…is simply how they deal with circumstances that they experience. They can either learn from a negative experience and grow…or wallow in self-pity and disappointment and never make their life better.

Life is a peculiar thing…everything in it has two sides. How you choose to perceive and manage each event will affect the direction of your life.

This leads me to the following little reminder that I thought would give you “food for thought” when thinking about the virtues of life.

HATE has four letters…so does LOVE

ENEMIES has seven letters…so does FRIENDS

NEGATIVE has eight…so does POSITIVE

UNDER has five…so does ABOVE

CRY has three letters…so does JOY

ANGER has five letters…so does HAPPY

RIGHT has five letters…so does WRONG

HURT has four letters…so does HEAL

It means that Life is like a double-edged sword…..

so transform every negative side into an aura of positivity…

We should ALWAYS CHOOSE THE BETTER SIDE OF LIFE!

Photo by nicollazzi xiong on Pexels.com

We all have struggles and burdens that we deal with on a daily basis. For untold thousands of people, they can carry hardships, misery, and a sense of doom with them for years.

Today, I would like to share the following story from a blogger friend of mine, Chuck L., author of a fabulous site, “Dr.JoyFinder.com” I think that you will enjoy his “Bits of Wisdom,” art, and other ways of finding joy.

The Boy Who Saved A Village

Once upon a time in a small mountain village, it was the custom for the villagers to strap on their knapsacks each morning. Then, during the day, each time they worried about something or felt depressed about a problem, they would pick up a small pebble and put it in their knapsack. The knapsacks were heavy and a burden to carry because the villagers never emptied them. They carried their burdens every day.  It was all they knew.

One day one of the village elders walked down to the river bank bent over from his knapsack full of burdens and noticed one of the small boys from the village skipping pebbles across the water. The boy’s knapsack was empty.

“What are you doing?” the old man asked. “And why is your knapsack empty? Why aren’t you carrying your burdens like the rest of us?”

“I come down to the river bank at the end of each day,” the boy said, “and skip my pebbles across the water until my knapsack is empty. I see no reason to keep carrying them.”

The old man was stunned and so bent over from his knapsack full of burdens that he could hardly move. He had never seen anyone cast their burdens away like that.

“Would you like to try it?” the boy asked.

The old man was hesitant, yet it seemed like such a good idea.  Slowly he reached into his knapsack that was large and heavy from all the burdens he had accumulated over many years. He grabbed a pebble and studied it, recalling the burden of pain that he felt when he had placed it in his knapsack.  He was so bent over that it was difficult to cast the burden away and watch it skip across the water and finally disappear, but he somehow did it.

The old man smiled also.  It was easier than he thought to let go of the burden. Then he tossed another pebble, another burden, then another, and another.  The boy stayed and watched.  They built a fire and the old man kept throwing until his knapsack was at last empty. He felt so relieved.

The next day the old man, standing straight and tall, told the other villagers what happened and how good he felt.  They could see how happy he was, how he looked and acted like a different person. They were amazed.

At the end of the day, all the villagers joined the old man and the small boy and went to the river bank and skipped their burdens across the water until their knapsacks were empty. They were amazed at how good and happy they felt.  They never continued to hang onto their burdens again.

A sign was erected at the entrance to the village that said, “IT’S HARD TO BE ON TOP OF THE WORLD WHEN YOU’RE CARRYING IT ON YOUR SHOULDERS. LET GO AND LIVE.”